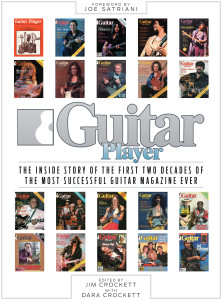 Guitar Player: The Inside Story of the First Two Decades of the Most Successful Guitar Magazine Ever is a reflection on Guitar Player‘s often pioneering early days, from its 1967 founding through its 1989 sale by founder Bud Eastman and editor/publisher Jim Crockett. This book looks at the magazines evolution from a 40-page semi-monthly to a monthly exceeding 200 pages, with a gross yearly income that grew from $40,000 to nearly $15 million.

Among the many illustrations are then-and-now shots of performers and staff, early ads, behind-the-scenes photos from company jam sessions (with such guests as B. B. King and Chick Corea), various fascinating events, and key issue covers. Rich in history and perspective, Guitar Player: The Inside Story of the First Two Decades of the Most Successful Guitar Magazine Ever is the definitive first-person chronicle of a music magazine’s golden age.

Special offer for Steve Howe fans: 25% off the cover price plus free domestic shipping (least expensive method) when you order at guitarplayer.halleonardbooks.com! Use the ad code BBHL at checkout.