Steve Howe has, over the last 50 years assured his position as one of the world’s pre-eminent guitarists. His uniquely fluid and creative style helped propel rock bands Yes and Asia to superstar status.

Throughout his career Steve has included pieces for folk and classical guitar in his repertoire, with compositions such as ‘Clap’ and ‘Mood For A Day’ becoming perennial favourites.

This regard for the classical form has found full expression in his latest solo release—TIME.

Five years in the making, TIME sees Steve playing new music with a classical ensemble and bringing a fresh approach to works by Bach, Vivaldi and Villa Lobos. The music deftly weaves haunting melodies with lush pastoral arrangements and is Steve’s first album without drums.

The CD is a collaboration between Steve and film and tv composer, Paul K Joyce. 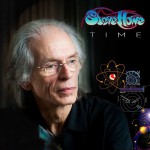